As far as i know, these cars share a lot of parts with the early 626 models. These Mazda's were not so rare, and maybe therefor are more spares to find. 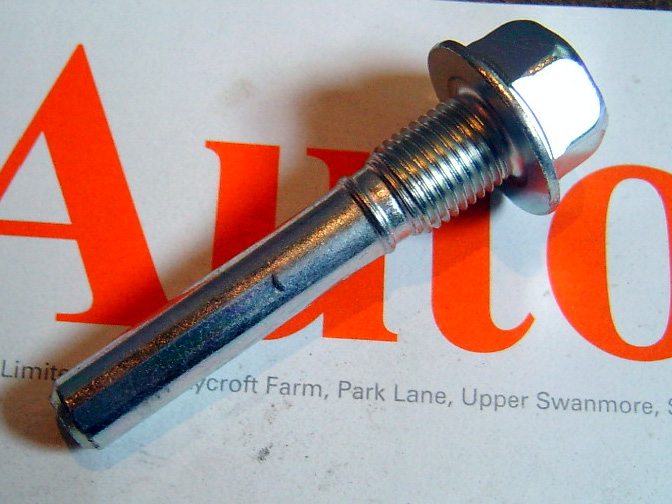 Brilliant - the Ebay used set of 4 bolts arrived today. The pair for the rear are nearly correct, just need shortening, a simple task.


The front bolts aren't correct though. I haven't got a picture to hand, but the FB bolts have an unthreaded section of ~1cm behind the head, then a screw thread of ~1cm, then the slider part. I'll probably reassemble with the slightly bent pin I have for now and see how much it affects the smooth operation, while I try and find a source for a replacement.

Small beer compared to the major projects reported on here, but satisfying to get KIMI 2 back on the road this afternoon - and a lovely day for a drive too. I've just come back from a 25 mile run to test the brakes. Emergency stop locked the wheels and she pulled up in a lovely straight line

This is the (bent!) slider bolt I've had to re-use. Luckily, the caliper still moves freely, probably because of compliance in the rubber boot, but I'd like to replace it sooner rather than later, if I can find a source! 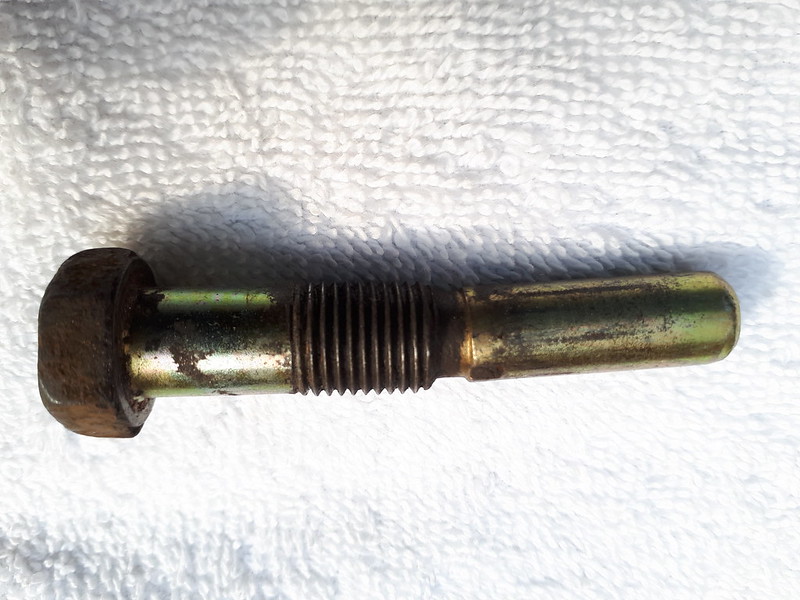 Having rebuilt a few calipers now, it didn't take long to clean this one up, apply a coat of VHT paint (cured in the kitchen oven whilst the wife wasn't looking

), new seal and boot. The orange plastic tool was just perfect for manoeuvring the rubber boot and metal securing ring into position. Positioning the boot took me ages last time, this time it was no more than 5 minutes assemble the piston into position. 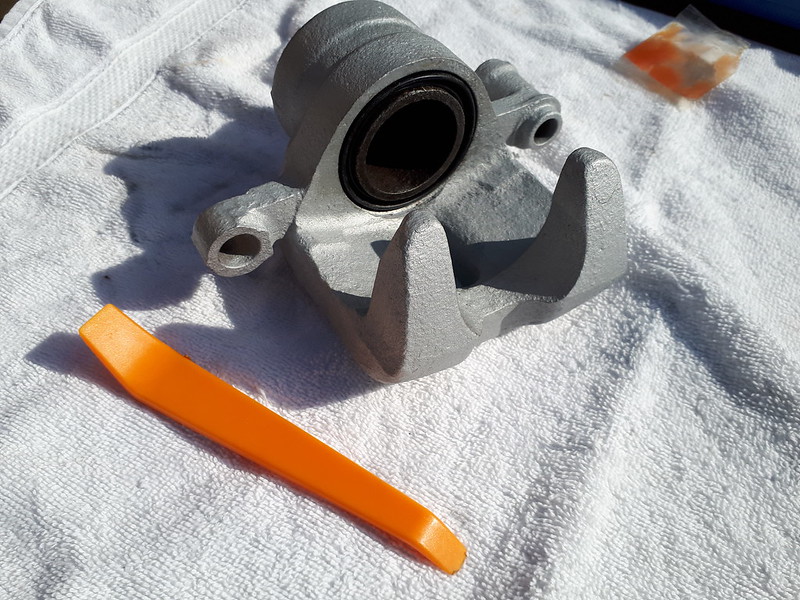 Back in place with new bleed nipple too. 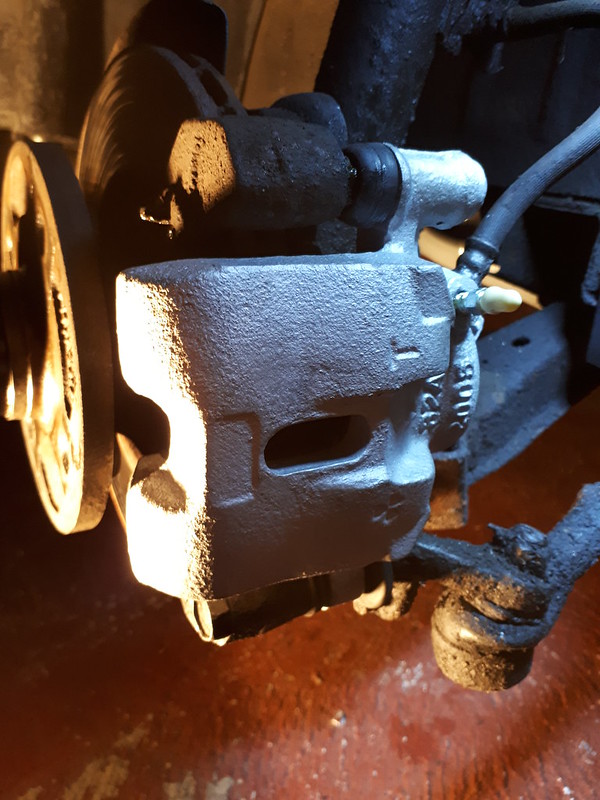 . I'm leaving it in place for the moment, until I can go a good clean up and apply some anti-corrosion treatment.

I have today sold KIMI 2 to Ian Mothersole.

A sad day in some ways, having cared for and enjoyed the car for 4 years. I feel satisfied though, in that the previous owner was planning to scrap the car

, so a good feeling to have brought it back on the road after it had lain unused for 10 years.

I'm very pleased that Ian has decided to purchase the car. He was instrumental in enabling me to buy the car, travelling up with me in a hired transporter to collect it from Leicester and arranging with his parents to park it at their home whilst we got it roadworthy. He assisted greatly with the work of re-commissioning the car in the early months, so he knows the car very well and will hopefully continue this topic in due course.

That was quick Malcolm but good that it's all sorted in good time with your lovely new car arriving. It's sad in a way after the love you've put into it but you can rightly be proud of the job you've done recommissioning KIMI 2 and getting it into such a great condition. Good that you've managed to pass the car onto a mate as well for him to enjoy it.
Onwards and upwards...... have you got KIMI 3 home yet?

I thought I'd posted up some pics of KIMI 3 on my drive, but clearly not

She's now securely tucked up in my garage

I offered to help my friend Ian, KIMI 2's new owner, sort out an issue he was suffering with the engine cutting out at 60mph+. Ian brought the car over to my place today so we have a look-see. We suspected the fuel filter to be the culprit as I have to admit, much to my shame, that I'd omitted to change it since I acquired KIMI 2 in 2015

Sure enough, we did the fuel flow test, spec is 1.1 litre+ over 60 seconds, measured by pulling off the fuel hose into the carb. Well, a dribble came out and we measured only 50ml over 15 secs

, so pointing to the filter or, less likely, the pump.

I rang more than 12 local car factors trying to obtain the same shape filter off the shelf. 10 of them said, "we can get that in for you tomorrow", 2 said they might be able to get one in by early afternoon, so I decided to ask both of them to go ahead. One then called back to say, "sorry, it will be tomorrow", the other one, Wilco, called an hour later to say it had arrived and we could go to collect, cost £4.99

All fine now, except the filter bowl remains stubbornly half full, with an air pocket above the fuel. We tried to remove the air by rotating/jiggling the filter, but it won't budge. From what I can tell, this is not a problem, and certainly didn't cause any issue on a 30 min test drive.

So, Ian and I are both set now to take our FB's down to Beaulieu next weekend

Ian has set up a new account on here, "Ian.M" and will hopefully start a new topic in due course to continue on the story of KIMI 2. When that starts, I'll link from here and lock this topic.

For future ref, here is the Blueprint filter and part number we managed to get same day. We were after the Mann WK42/14 branded part, but the Blueprint one looks to be well made.


Also pic of the filter that came off

Tipping the fuel out revealed a lot of fine crud that had got in there from the fuel tank. Lesson learned, I'll aim to change that filter more regularly (I've changed the filter in KIMI 3 last week, even before I knew of Ian's issue with KIMI 2!)

You are looking at the problem in the wrong manner, I think I remember you telling me you were going to leave it as a training exercise for the new owner to learn about the fuel system

cough, yes, cough, of course, I completely forgot about that plan