Following on from one of the most popular threads on the forum, here's a latest sightings thread for FC's.......a very handy thing for keeping track of asking and sale prices and will also give a good indication of the current state of the market for the FC's.
To start us off, here's one... 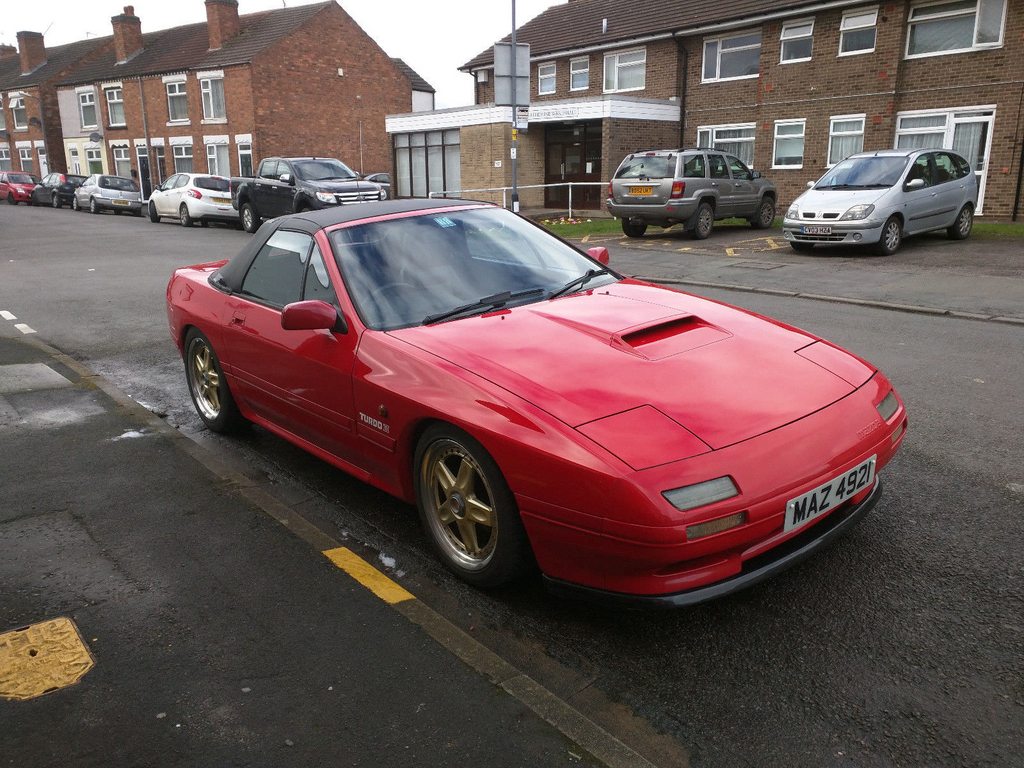 'Not something I really wanted to do but I've had to rationalise my car projects somewhat so the RX7 has to go!

I've had the car for just over two years now, bought back in Dec 2015, in that time its been totally reliable to me and has served as my daily driver for a fair amount of that time!
The previous owner had it since around 1999 and had the engine rebuilt at RX motors in the year 2000 at around 99k miles or so from memory, the car is now just over 127k miles and starts and runs well.
The electric roof, windows and cruise control all work perfectly, the headlights go up and down as they should. The factory LSD still functions well.
A brief summary of bits I've fixed/modified in the time I've owned it:

The car isn't without its issues, I try to be fair and list as many as I am aware of so there aren't hidden surprises:
The windscreen has a crack in the bottom corner, it got through the last MOT but has grown a bit since then
The drivers side A pillar has some rust on it, I think its still surface only but haven't poked it too much to be honest
The suspension is tired and knocks on the bump stops on big bumps (I have a brand new set of HSD Dualtech coilovers that will go with the car)
The cold idle (idle control valve/throttle linkage system) needs looking at, sometimes its fine, sometimes the car tries to idle too low before realising and bumping it back up, once warm it usually idles bang on.
The paint is a bit faded in areas
Roof has seen better days and has small tears in the usual FC vert places
AEM boost gauge has stopped reading, think it needs a new sensor
One of the (I think) rear wheel bearings has started getting noisy
Drivers seat base bolster has partially collapsed
The split rim bolts have some surface rust on them

I also have some parts to go with the car; the original steering wheel, tonneau cover for the roof, a JDM ECU with rtek 1.7 chip fitted, spare coil packs and AFM etc.
I do also have the original 15" BBS which can be swapped onto the car if preferred, or could be included as part of a deal.
As mentioned above, I'm selling as I need to focus more on my other automotive projects and its not currently economical for my commute as much as I love driving it.
I will listen to reasonable offers, but will ignore ridiculous offers or messages with simply a number in them. These cars are very rare and considering some of the work that has gone into mine, I think it's a fair valuation.
Any test drives will be subject to me seeing proof of insurance and proof of ability to pay for the car. Otherwise I am happy to drive.
Cheers for looking!' 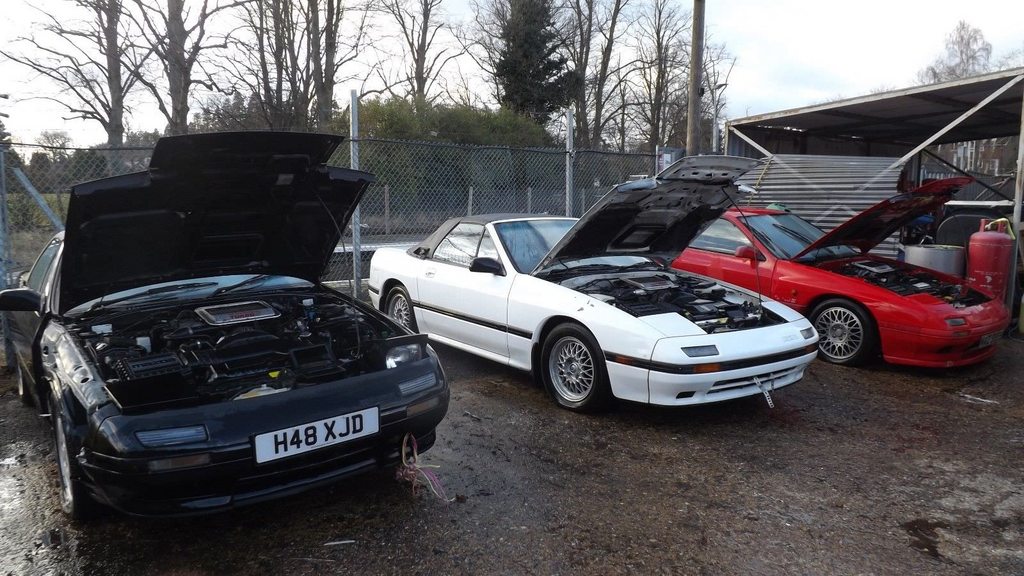 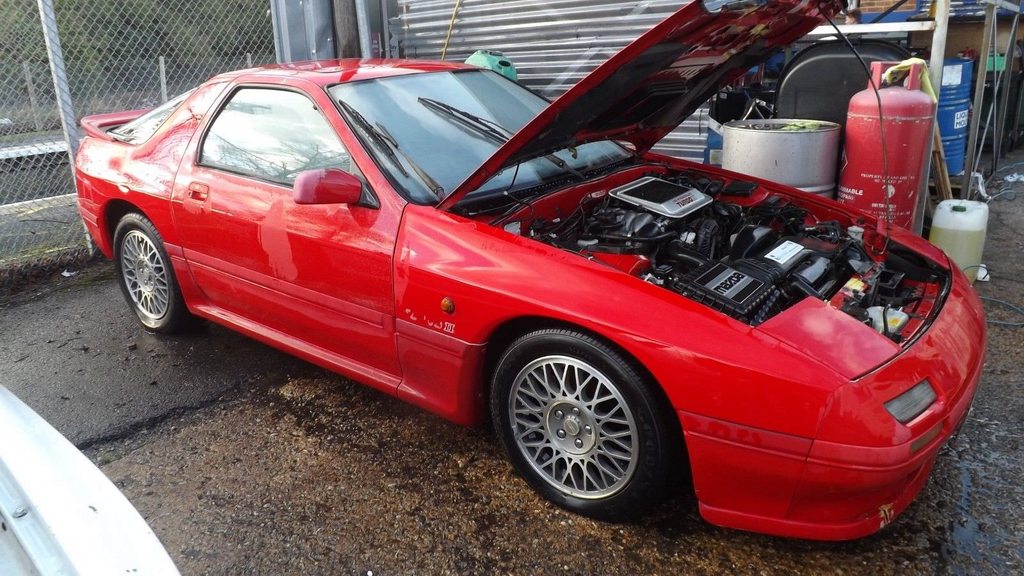 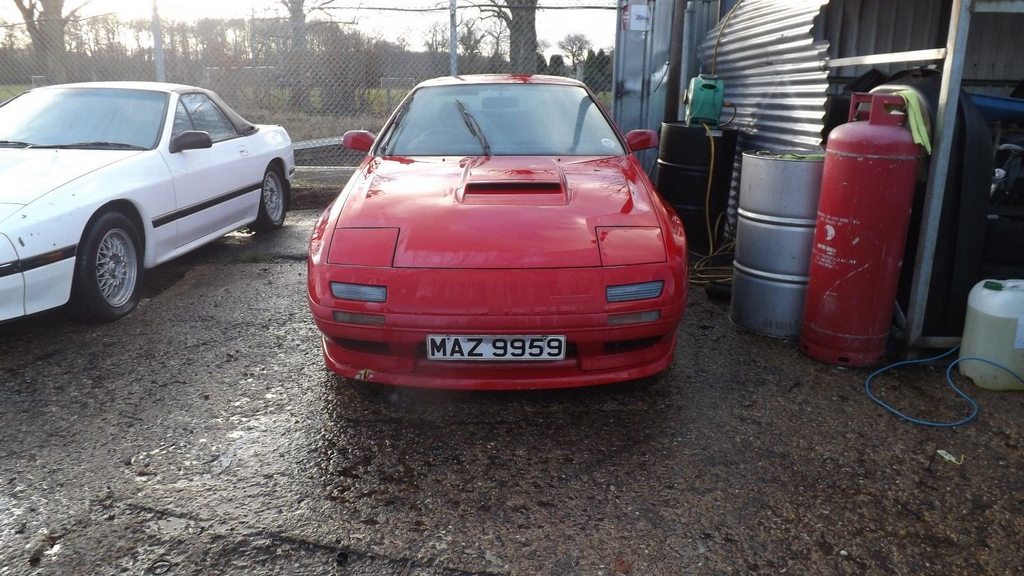 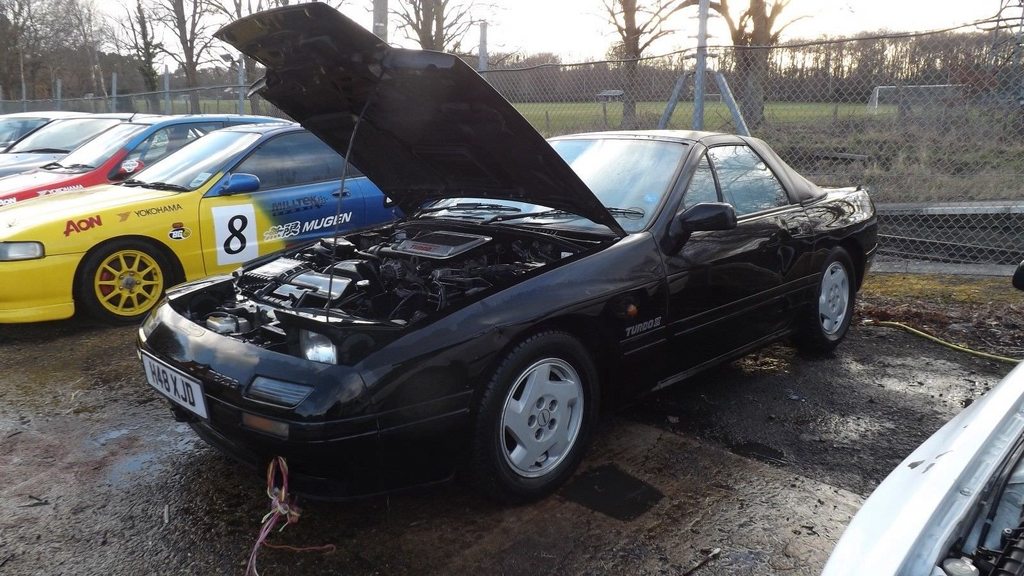 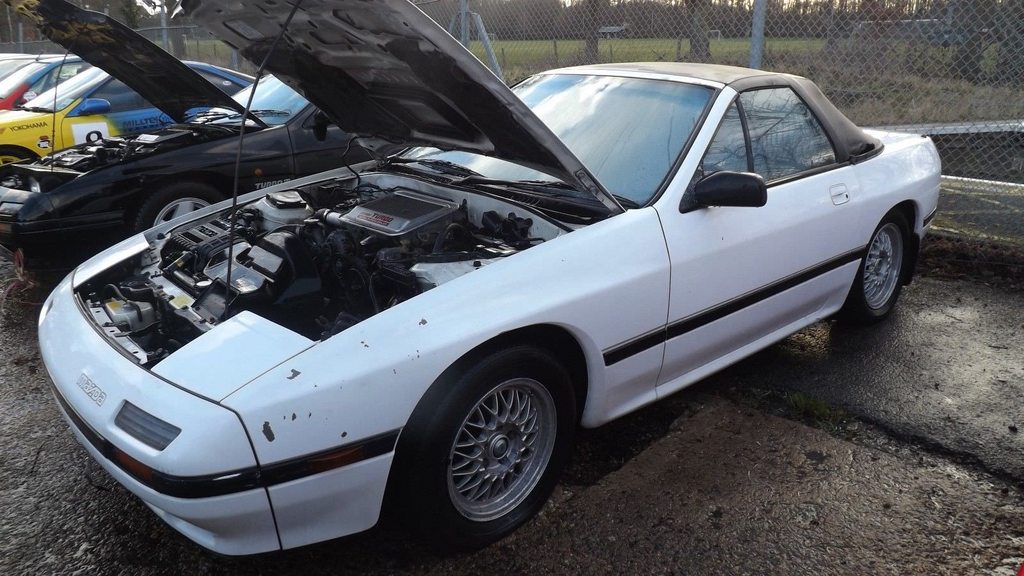 Well where do we start!.Found in a local barn we have 3 x Mazda RX7 s, 2 Convertibles, 1 Coupe All TURBO 11 s all complete and have all V5 s old and new and Keys etc etc. These are RARE and either Resto projects or spares to make a good 1 out of the 3 or break for parts which im sure you would struggle to get these days so would probably dismantle to a small fortune. We was told by the farmer that 2 drove in and 1 would not start ie; 1 of the convertibles. Would like all 3 to go to a good home together but may separate if price is right.These are now classics and are fast becoming hard to find Turbo 2 s. Please message or call and will be happy to help and we strongly recommend a viewing prior to bidding to satisfy yourself as these have been parked up for at least 10 years and do not expect mint cars as we say these are RESTORATION only.YOU ARE BIDDING FOR ALL 3 CARS.They are advertised elsewhere so may be withdrawn from auction.Call 07730 337012/01344777005 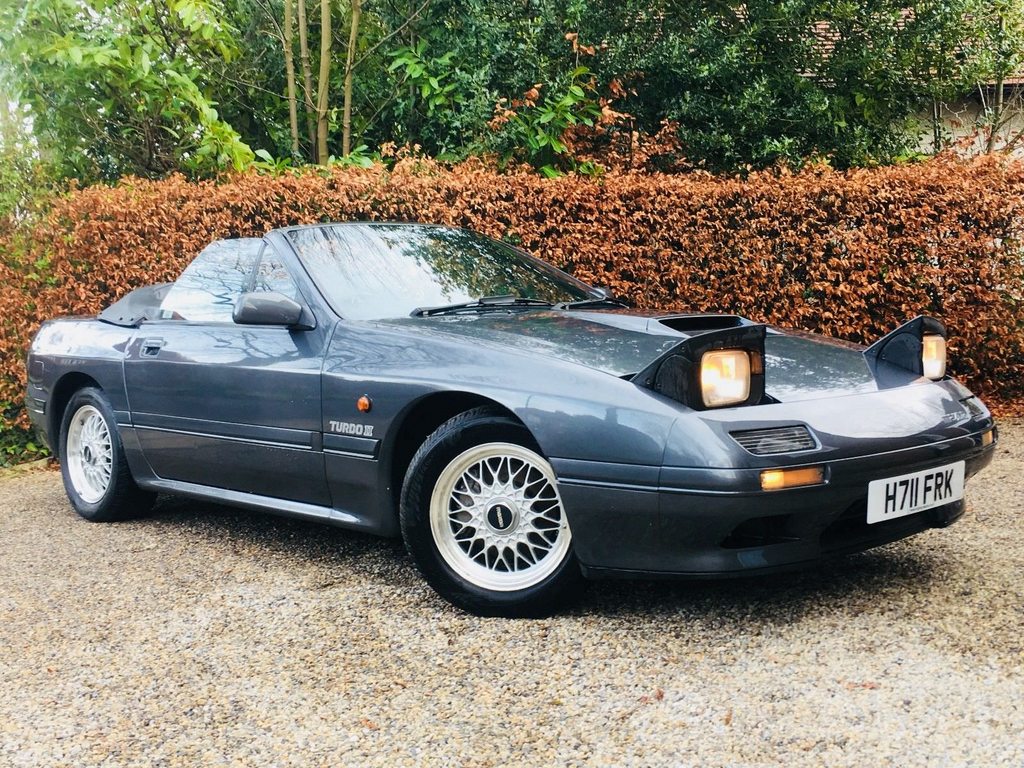 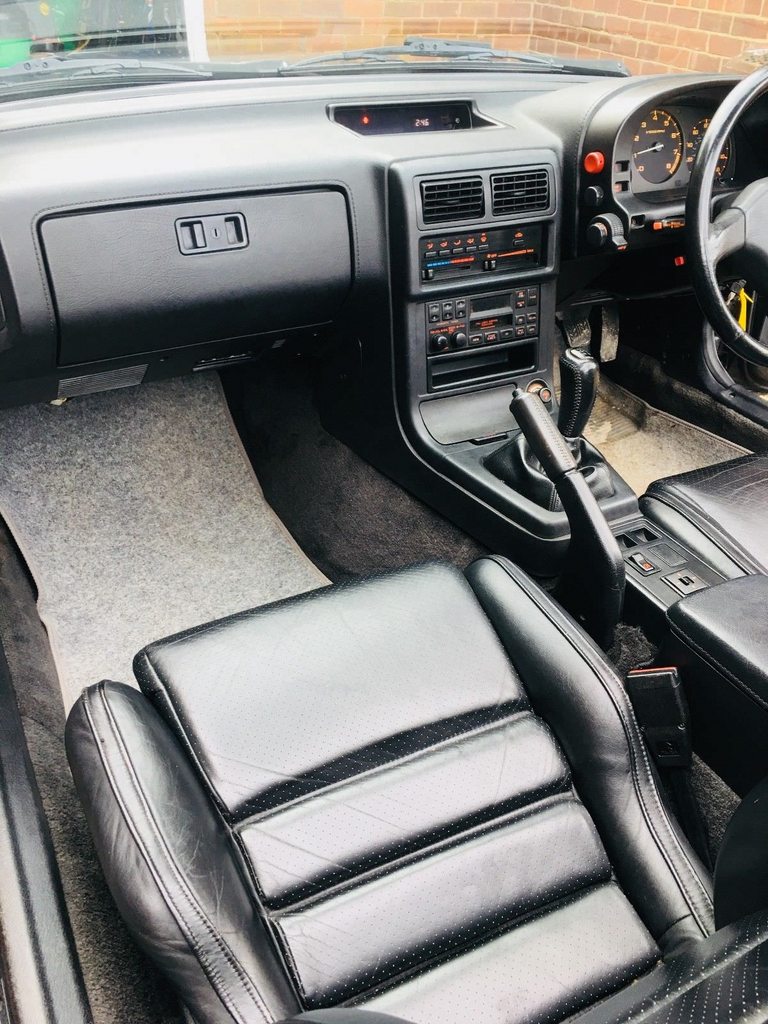 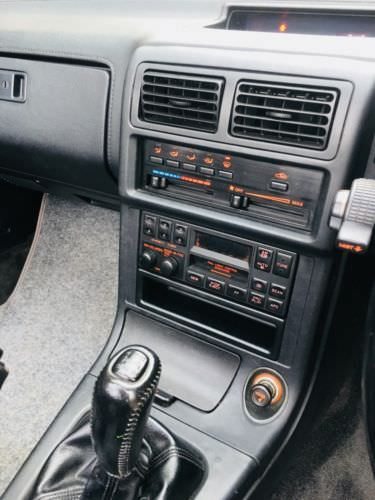 Finished in stunning graphite metallic with a black leather interior. This is in true timewarp condition throughout. The paintwork is oin excellent order and has no evidence of any of the usual corrosion issues you would associate with most models of this era. The alloys look incredibly fresh (yet still original) If I were being picky of the condition I would highlight some very minor kerbing to the edge of 2 alloy wheels and the odd minor car park “dink” (barely visible) . The hood has a small inch long split on the top seam (easily repaired) but this does not let in water. The hood functions exactly as it should and there is also a factory fitted wind deflector and tonneau cover in place. Tyres are all uniroyal branded and matching on all four corners.
The car drives without fault and comes with a current MOT in place until September this year.
As you would expect with such a fine example all documentation is present including all manuals, both keys and an incredibly thorough service history – the Book is stamped exclusively by Mazda Main Agents as well as a plethora of service invoices again predominantly from main agents including a full engine rebuild costing over £3000 at 53k miles. All old mot's are present confirming its very low mileage of only 70000, as are the tax discs and corresponding RFL reminders.
This is a very very original car that has clearly been cherished by just 4 owners from new and is ready to be enjoyed again.
Please contact us for further details. Part Exchange up or down is welcome with any classic or modern vehicle.

1991 Turbo II coupe being broken for spares in Scotland 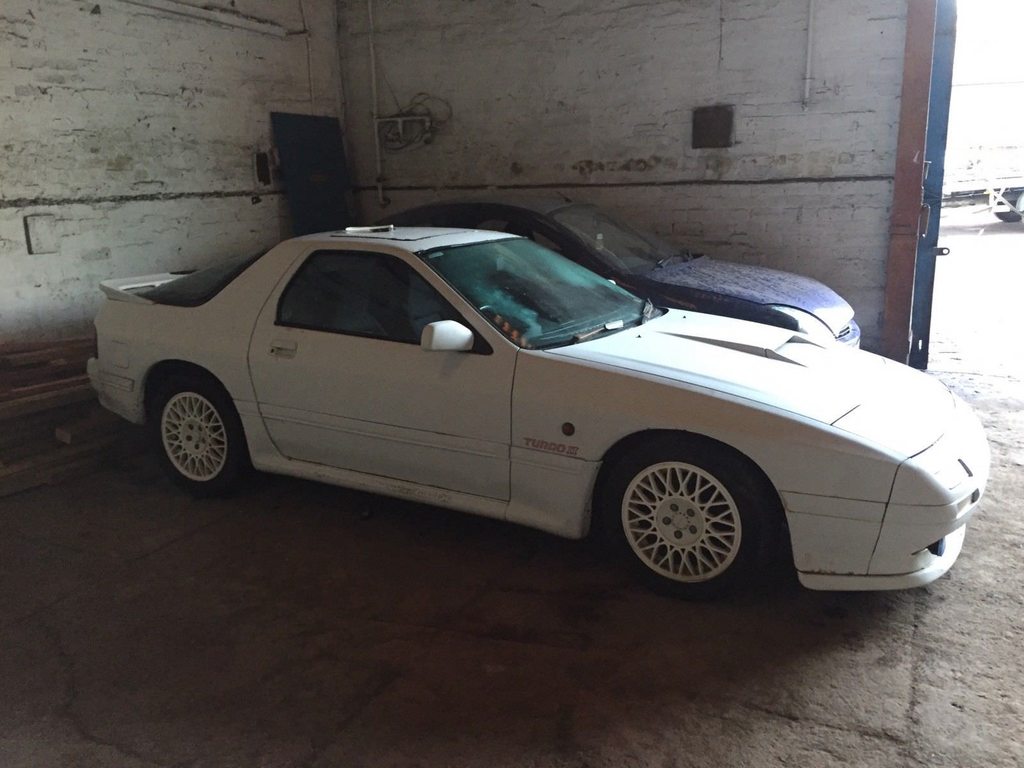 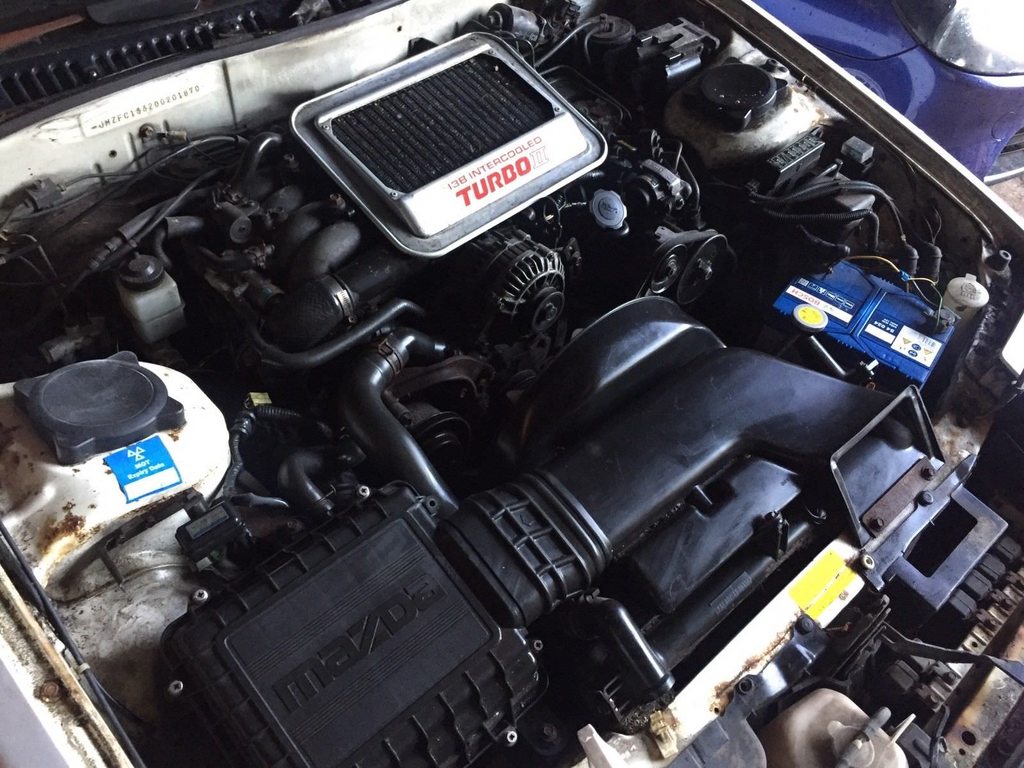 I BOUGHT THIS WITH THE INTENTION OF RESTORING BUT IVE JUST TOO MANY PROJECTS NEEDING LESS WORK SO REGRETTABLY THIS LOOKS LIKE ITS 1ST IN LINE TO GO AND THINK I MAY DO BETTER BREAKING IT AS OPPOSED TO TRY AND SELL COMPLETE....SO...REMOVING FROM A MAZDA RX7 FC TURBO-2, COMPLETE 13B ROTARY TURBO ENGINE AND 5SPD MANUAL GEARBOX,COMPLETE AS REMOVED WITH ALL MAIN ANCILLARIES STARTER ALT TURBO ENGINE HARNESS INTERCOOLER GEARBOX ...CAR SHOWS 95k...2 OWNER CAR 1st BEING MD OF LOCAL MAZDA DEALERSHIP WHO CLEARLY CHERISHED THE CAR AS THE MANY INVOICES AND SERVICE BOOK TESTIFY,ITS HAD PILES OF CASH LAVISHED ON IT TO KEEP IT RUNNING PERFECTLY...LAST OWNER HARDLY USED IT AND ITS BEEN STOOD SINCE 2012...NOW RUNNING MINT OFF THE KEY BOTH HOT AND COLD ITS NEAR SILENT.FEEL FREE TO COME AND HEAR IT RUN..UK MAINLAND DELIVERY £75. SADLY SHELL IS ROTTEN BUT £2500 WOULD BUY IT COMPLETE IF ANYONE BRAVE ENOUGH,PERSONALLY ID RE-SHELL IT IF HAD A CLEAN FC SHELL SITTING..OR SOMEONE HATED THE WIFE ENOUGH TO WANT TO SPEND THE NEXT YEAR IN THE GARAGE WELDING 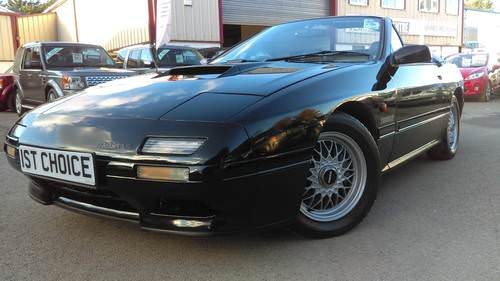 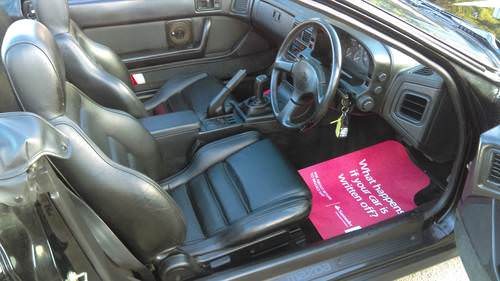 THIS IS SIMPLY STUNNING
A 1 PRIVATE OWNER FSH 1992 MAZDA RX7 TURBO CONVERTIBLE IN BLACK WITH BLACK LEATHER
NOT REALLY A LOT TO SAY FIND ANOTHER LIKE THIS !!!!
SERVICED AT .
952 MILES MAZDA DEALER //7677 MILES MAZDA DEALER //22127 MILES MAZDA DEALER //23355 MILES MAZDA DEALER INDEED ALL THE SAME DEALER
WE ARE ALSO RESEARCHING IF THERE ARE ANY OTHER BILLS AND SERVICES AVAILABLE
ELECTRIC ROOF ELECTRIC WINDOWS CENTRAL LOCKING PAS TINTS ALLOYS .
A VERY LTD RUN OF THESE WAS DONE AND THIS IS ARGUABLY ONE OF THE BEST YOU WILL EVER FIND
WE ARE DELIGHTED TO OFFER AND OWN AND THIS VEHICLE HAS CLEARLY BEEN CHERISHED BY ITS ONLY OWNER
A VERY RARE AND HIGHLY SOUGHT AFTER CLASSIC CONVERTIBLE
THIS WILL NOT BE WITH US LONG
PLEASE CONTACT US TO ARRANGE A VIEWING THE VEHICLE WILL BE UNDER COVER IN OUR SHOWROOM .

Never realised they're were so many t2 coupes for sale. This section will not do my FC WANT! levels any good

I have had 3 very happy years in a convertible previously. I want did I say

The car in Scotland is so tempting.

I have had 3 very happy years in a convertible previously. I want did I say

The car in Scotland is so tempting.

same here, I've thought about getting a T2 coupe a few times!
Top

Now I hate saying this (because I like cars for driving not appreciating in value) but surely a nice t2 coupe will fetch 10k . which makes a cheap one tempting? Plenty of money can be justified in bringing it to standard?